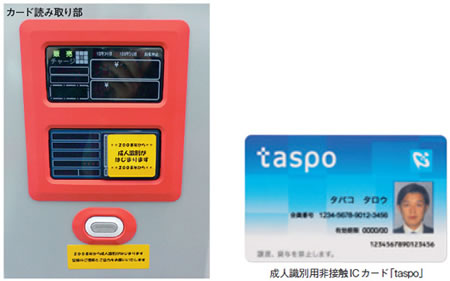 Smoking is still relatively popular in Japan. The smoking rate among adult men is almost 50%, while for women it is below 15%. Cigarettes can be bought easily from the 62000 vending machines across Japan. In an attempt to reduce the number of minors that purchase cigarettes through vending machines that are available unrestricted across Japan, the Japanese tobacco association is going to install dispensers with adult identification function all over Japan. From March 2008 Japanese will be able to buy cigar from vending machines with a taspo card only. Taspo, the Tobacco Card is a smart card being developed by the Tobacco Institute of Japan (TIOJ), the nationwide association of tobacco retailers and the Japan Vending Machine Manufacturers Association for introduction in 2008. Following its introduction, the card will be necessary in order to purchase cigarettes from vending machines in Japan.

The tobacco vending machines with FOMA(Freedom of Mobile Multimedia Access, is the brand name for the 3G services being offered by Japanese mobile phone operator NTT DoCoMo) terminal built-in will help the Japanese to fight against the sale of cigars to minors.