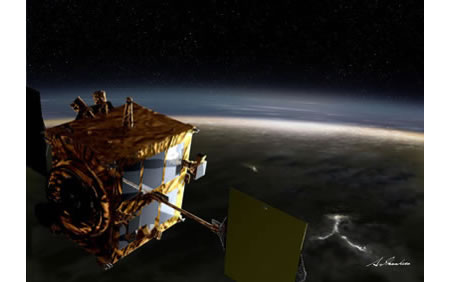 Japan has christened its next deep space mission Akatsuki, meaning dawn in English, a half-year before the spacecraft is dispatched toward Venus to analyze the planet’s smothering atmosphere. The 1,058-pound robotic probe will launch aboard an H-2A rocket from Japan’s Tanegashima spaceport around May 20, 2010. If Akatsuki departs Earth in May or June, the spacecraft will arrive at Venus in December 2010. The name Akatsuki was selected because Venus shines brightly as the morning star just before sunrise, according to the Japan Aerospace Exploration Agency. After its six-month cruise through space, Akatsuki will enter an equatorial orbit around Venus stretching from just above the planet’s blanketing atmosphere to an altitude of nearly 50,000 miles.

Six experiments will allow Akatsuki, also called Venus Climate Orbiter, to peer deep into the planet’s atmosphere and even study surface activity. A lightning and airglow camera will take pictures of the night side of Venus.Akatsuki’s sensor package includes two infrared cameras to observe lower level clouds and collect data on potential active volcanoes. A longwave infrared instrument and ultraviolet imager will look at cloud tops and track global storm systems to produce wind maps. Akatsuki will operate for at least two Earth years, and scientists hope the Japanese mission will arrive in time to work with Europe’s Venus Express probe already at the planet.