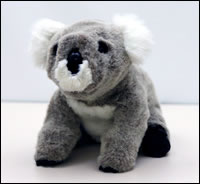 Kobie the most advanced robotic pet made in Korea

When a finger pokes its belly, the startled koala bear waves his four legs with its body still laid prone. Then he grumpily turns his face to see who did this. Kobie, a fluffy robotic pet made by the Electronics and Telecommunications Research Institute (ETRI), is able to show such emotional reactions to touches and voice, and can even recognize human faces, the researchers said on Thursday. Kobie is by far the most advanced robotic pet made in Korea, and is not far behind similar ones made in Japan and the United States. Kobie is smarter, friendlier and more affordable robotic companions for humans. When you slap Kobie once, he acts as if he is surprised. But when you keep hitting him, then he begins to show that he is scared and frightened. The secret of such shrewdness is its wireless communication function. When the tactile, light, audio and posture sensors hidden in Kobie’s puffy body receive certain signals, they are wirelessly transmitted to a nearby server station, such as a home PC.

The server then analyzes the signals and sends back appropriate orders to Kobie’s body. By placing Kobie’s brain apart from its body, it became lighter, more energy-efficient, and cheaper to produce. Modern robot pets such as Kobie are designed to make people feel emotionally attached to them. Many scientists refer to such robots as “Mental Commitment Robots,” and are trying to use them in healing mentality ill people.