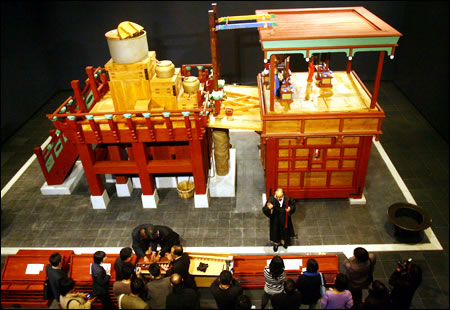 Korea recreates water clock Jagyeongnu that was first made in 1434

The National Palace Museum of Korea unveiled its recreation of a Korean water clock known as Jagyeongnu from the Borugak Pavillion that was first made in 1434 during King Sejong’s reign. The water clock is regarded as one of the greatest inventions in Korean science history. It is a standard self-striking water clock system, which uses the flow of water. A team, led by Professor Nam Moon-hyeon of Konkuk University, recreated the water clock based on the remaining parts of a clepsydra known as the Jagyeongnu, which was made during the reign of King Jungjong in 1536, the National Palace Museum of Korea announced Wednesday. The original, which was invented by Jang Young-sil, was the first water clock that was devised to strike a bell, gong or drum, automatically on the hour. It was lost, and another was created in 1536, being designated National Treasure No. 229.

The water, which is poured into the upper largest vessel, flows down the smaller one into a larger water tank. As the water level rises to a previously set position, a floating rod touches a lever, which causes a bead at the other end to roll down to hit another bead. This bead triggers many devices that strike a gong, bell or drum, and lift up a time notice board. In rebuilding the original water clock, the team built it so that the pouring vessel and the smaller receiving vessel would form a three-tier structure.