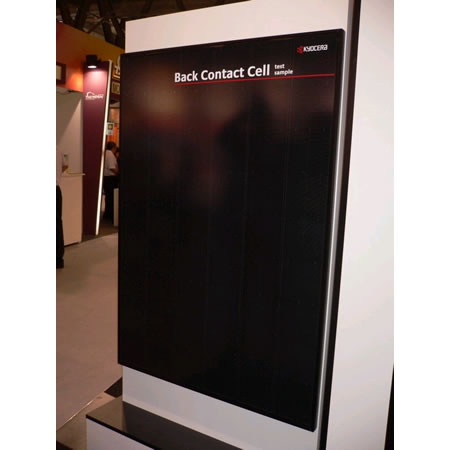 Kyocera Corp. Japan has prototyped a module using polycrystalline Si solar cells that achieved a high 18.5% energy conversion efficiency. The company has displayed the 18.5% conversion cell before, but this is the first time that it ever exhibits a module, Kyocera said. The prototyped module uses the above mentioned back contact design cell. Inserting a black back sheet behind the cells and employing a thinner design for the wiring called busbar, Kyocera made the overall module look black. This is to meet the increasing needs for black modules, which give minimal impact to the appearance of houses, when installed, Kyocera said. The company did not reveal the energy conversion efficiency and the output of an overall module.

The energy conversion efficiency of polycrystalline Si cells that Kyocera currently uses for its mass-produced modules is 16.5%. The module using 18.5% conversion cells will be launched onto the market in Fiscal 2008 or later.