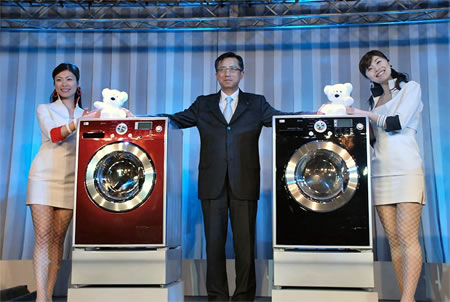 LG International Japan Co is launching into Japanese market washing and drying machines WD-S85 equipped with a function of removing allergic substance by vapor. The company emphasizes the function of allergic substance removal by vapor as a function that makes their product competitive in the Japanese market. When “allerclean” course is selected, vapor of 95°C is sprayed into the sink and keeps the temperature inside the sink at 60°C for 10 minutes during the washing process. Majority of allergic substances, such as shells and dirt of ticks, hair and dander of dogs and cats, are composed of proteins, which can be broken down by keeping the temperature inside the sink at 60°C for 10 minutes, the company claims. After this process, allergic substances are cleared off the cloths through beat-and-wash process, and then are drained with water through spin-dry process. According to Tokyo Environmental Allergy Research Institute, the machine removed 99.9% of allergic substances originating from cats and 95% of those from ticks.

The machine is expected to be equivalent to those the company launched in September 2006 into Europe, the United States, Australia and the Middle East. LG International Japan claims it sold 400,000 machines in foreign markets between September 2006, when they were released, and March 2007. The street price of LG washing and drying machines WD-S85 is estimated to be ¥228,000 ($1912) and is scheduled for release on April 25, 2005 in Japan.