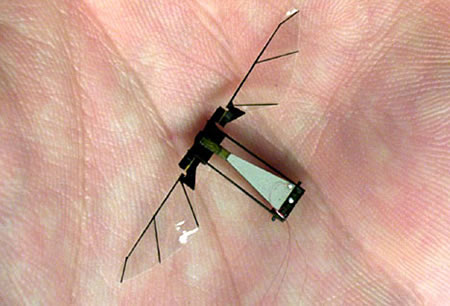 Harvard University researchers spent seven years with funding from the U.S. military to develop a life size robotic fly. The US defense chiefs plan to use the life size robotic fly in military surveillance operations. The Lightweight carbon joints allow the robot to mimic the exact movements of a real fly, with wings that flap at 110 beats per second. Professor Robert Wood, of Harvard’s School of Engineering and Applied Sciences, said that the real benefit of the robotic fly is that it’s agile, small and from a military aspect you wouldn’t be able to notice it. Possible applications involve putting the robot somewhere you don’t want to have a human.

The robotic fly weighs as little as a pin head and has a wingspan of just 1.18in (3cm).