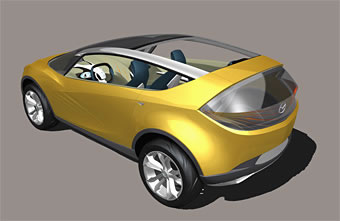 Mazda Motor Corporation will showcase the world premiere of the new Hakaze design concept at the 77th annual Geneva International Motor Show 2007.The Mazda Hakaze is a four-seat coupe-style compact crossover SUV designed at Mazda’s European Design Centre and aimed at people in their thirties and forties who lead active, adventurous lifestyles.Hakaze is the third design concept of the series created around the ‘Nagare’ design language, joining the Mazda Nagare and Mazda Ryuga which were revealed earlier this motor show season. Even when standing still, Hakaze seems to be effortlessly cutting through the air. Outside, the side body panels are textured to give the impression of sand dunes rippled by the wind and the body shape creates a muscular and taut look. The rear part of its roof is removable which gives it a feel similar to a roadster.

The interior seat layout of Mazda Hakaze is unique, as the rear seats slide forward with their lower cushions under the front seats to produce a spacious luggage compartment.