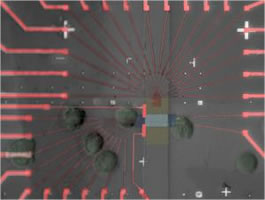 Memory circuit the size of a human white blood cell

A team of UCLA and California Institute of Technology chemists has created an ultra-dense memory device that stores information using reconfigurable molecular switches. The 20 kilobyte memory device has a bit density of 100 gigabit per square centimeter and has enough capacity to store the Declaration of Independence with space left over. The accomplishment represents an important step toward the creation of molecular computers that are much smaller and could be more powerful than today’s silicon-based computers. The ultra-dense memory device is based on a series of perpendicular, crossing nanowires, similar to a tic-tac-toe board: 400 silicon wires crossed by 400 titanium wires, each 16 nanometers wide. Sitting at each crossing of the tic-tac-toe structure and serving as the storage element is approximately 300 bistable rotaxane molecules.

These molecules may be switched between two different states, and each junction of a crossbar can be addressed individually by controlling the voltages applied to the appropriate top and bottom crossing wires, forming a bit at each nanowire crossing. However, the Caltech-UCLA team points out in their report that manufacturers can see no clear way at present of extending this miniaturization beyond the year 2013. The new approach of the Heath team, therefore, will show the potential for making integrated circuits at smaller and smaller dimensions.
Source – dailytech