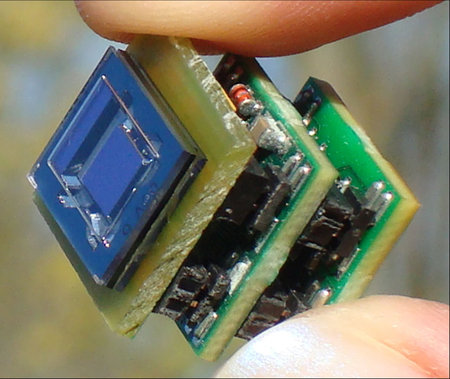 For the first time, a piezoelectric harvesting device fabricated by MEMS technology generates a record of 85μW electrical power from vibrations. A wafer level packaging method was developed for robustness. The packaged MEMS-based harvester is used to power a wireless sensor node. Within the Holst Centre program on Micropower Generation and Storage, imec researchers developed a temperature sensor that can wirelessly transmit data in a fully autonomous way. Once fully mature, the technology can be used to power sensors in industrial applications such as tire-pressure monitoring and predictive maintenance of moving or rotating machine parts.

Micromachined vibrational energy harvesters operating in the frequency domain between 150 and 1000Hz are ideal devices to convert vibrations from machines, engines and other industrial appliances into electricity. Thanks to their smaller dimensions, the micromachined devices are the prefered candidates for powering miniaturized autonomous sensor nodes.