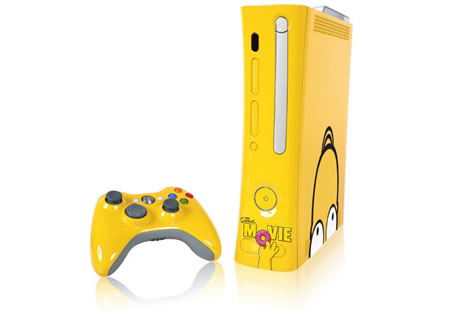 Xbox 360 is partnering with FOX to help promote “The Simpsons Movie,” offering fans the chance to get their hands on one of 100 limited-editions of Simpsons” Xbox 360. The limited edition consoles won’t be based on the newer Elite, but rather the older Premium system (no 120GB HDD and no HDMI output). The summer blockbuster movie season is quickly approaching, and soon Gamers will have the best seat in the house when “Shrek the Third, Pirates of the Caribbean: At World’s End,” “Ratatouille” and “Harry Potter and the Order of the Phoenix” arrive on Xbox 360 for star-studded game play.

In addition, people everywhere will be seeing yellow as “The Simpsons” takes Xbox 360 by storm later this summer in advance of the famous Springfield family’s big-screen debut on July 27, 2007. Various Microsoft promotions will take place during the weeks leading up to the release of the movie.