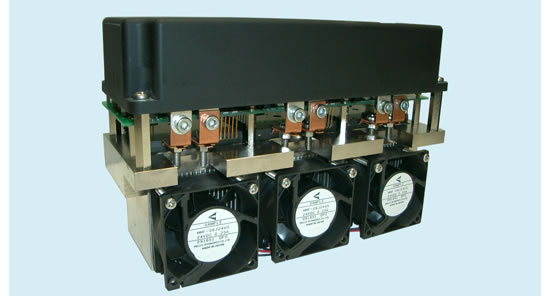 Mitsubishi Electric announced today it has developed a prototype forced-air-cooled three-phase 400V output inverter with all-silicon carbide (SiC) power modules that has a power density of 50kVA per liter. The inverter is expected to contribute to smaller and lighter power-electronics equipment in automotive and industrial applications, among others. The module, which is rated at 1,200V/300A, incorporates a SiC MOSFET (metal oxide semiconductor field effect transistor) and SiC SBD (schottky barrier diode).

While silicon (Si) has traditionally been used for power semiconductor devices, in recent years SiC has come to be widely considered as a promising next-generation material. Compared to Si, SiC has a critical electric field for breakdown that is about 10 times higher and enables the reduction of power loss, which contributes to fewer emissions of carbon dioxide. Furthermore, the reduction of power loss implies the reduction of cooling equipment, and contributes to overall downsizing and lightening of electronic components for automotive and industrial uses.