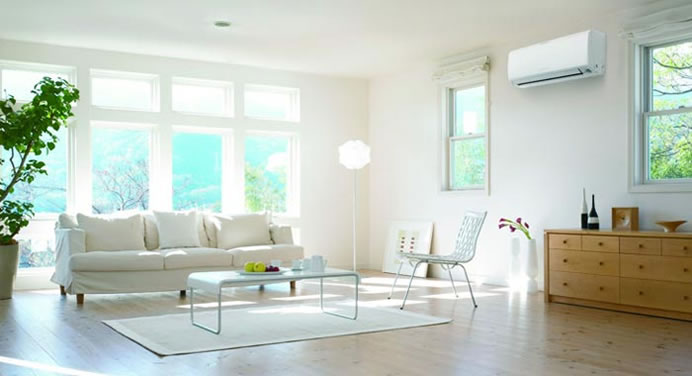 Starting in early March Mitsubishi Heavy Industries, will progressively launch three new series of air-conditioners for residential use, 17 models in all, into the Japanese market. The top-of-the-line SS Series will consist of 6 models featuring an outstanding annual performance factor (APF), showing annual energy consumption efficiency; the functionally advanced RS Series will include 5 models featuring automatic filter cleaning; and the standard TS Series will incorporate 6 models. The new TS Series models have been engineered with a special focus on environmental performance. They feature a new refrigerant, R32, with a global warming potential (GWP) approximately one-third that of R410A.

The SS Series models come with a motion sensor function that detects the level of ambient human movement and automatically controls the room temperature accordingly. When the sensor detects that no one is present, the unit reduces the capacity to prevent unnecessary cooling or heating; and when no one is in the room for a lengthy period, the operation will be stopped automatically. When someone reenters the room, the unit then starts the operation again. In these ways the SS Series models significantly help to save energy.

All models in all three series will be equipped with MHI’s powerful JET and WARP operating modes. JET delivers an especially large airflow, while WARP enables rapid cooling or heating. An Automatic Airflow function is also provided, that automatically controls the airflow volume and direction to achieve a uniform temperature throughout a room. Together these functions ensure maximum comfort in all home settings. With its lineup of 17 models in three new series, MHI will be ideally positioned to respond to a wide range of user’s air-conditioning needs.