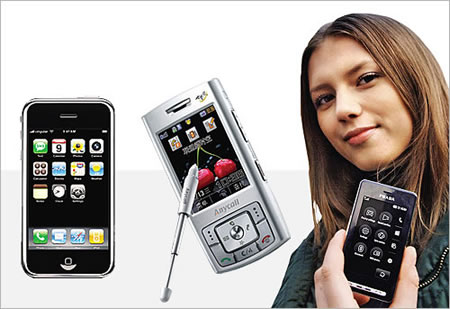 Samsung Electronics, Nokia and Sony Ericsson are striving to develop touch-screen cell phones, following devices unveiled by Apple and LG Electronics recently. On the new keypad-less phones, users touch icons on the display instead of pushing buttons. Apple’s iPhone ignited the touch screen boom. Introduced last month, the iPhone allows users to operate a variety of functions like an MP3 player, camera and web browser simply using one or more fingers. LG Electronics also included a touch screen on its recent Prada Phone, which was developed in cooperation with the premium Italian fashion brand. While some Korean cell phones have featured partial-touch screens, the Prada Phone is the first Korean cell phone to have a full-fledged touch system. Samsung, which has built partial-touch phones, plans to unveil a smartphone this month with a vibrating touch screen.

When users touch the screen, the vibrations give the feeling of pushing real buttons. Meanwhile, Pantech and Sony Ericsson are developing slide touch-screen phones. The phone industry is developing the touch-screen models because the button-less phones look better and are easier to use than their button-type counterparts.
Via – english.chosun.com