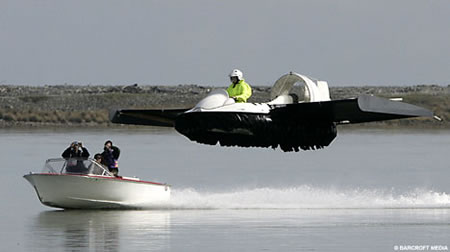 Mr. James Bond this hovercraft can fly 4ft 6in above water at 60mph!

New Zealand mechanic Rudy Heeman has developed a hovercraft with the ability to lift- off, leaving other water based craft in its wake. Heeman has spent the last eleven years building a hovercraft. Its’ optimum height is about 4ft 6in above the water. The hoverwing sets off like a normal-hovercraft but when it reaches top speed of 60mph, its wings can be extended and it takes flight. Rudy Heeman feels that there may be a commercial market for his creation-the hoverwing. He feels that his invention is an extremely efficient method of transport, travelling at about 6ft over the water and reaching speeds of over 60mph across the surface. 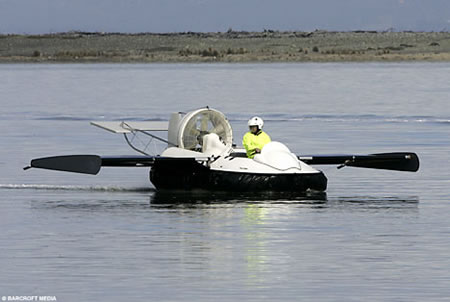 Officially this invention is a ‘wing in ground effect vehicle’ – a hovercraft which is able to fly due to a set of unusual aerodynamics. The first test flight ended in a crash landing. He escaped with a bruised leg and and it was back to the drawing board. But after hours of tinkering he made the necessary adjustments and now believes the hoverwing is ready. It has room for one passenger, but Mr Heeman has yet to decide who to choose.