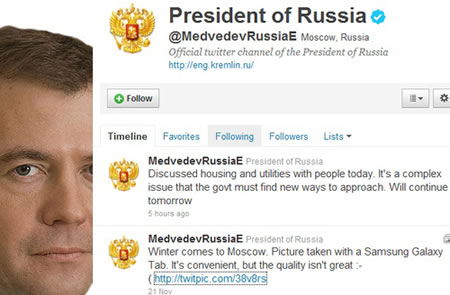 Russian President is not happy with the quality of the camera on his Samsung Galaxy Tab. On his official Twitter page on Monday (local time), he wrote, winter comes to Moscow. Picture taken with a Samsung Galaxy Tab. It’s convenient, but the quality isn’t great. Russian President received the newly-released tablet PC while visiting Korea for the G20 Seoul Summit earlier this month. As well as a frequent blogger and Twitter user, the 45-year-old president is a keen photographer and usually shoots with an 18-megapixel Leica M9 DSLR camera.