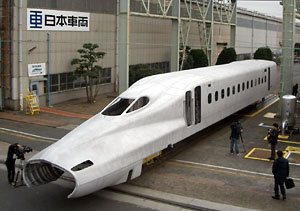 The new model of high-speed train N700 was shown to reporters today at the Toyokawa factory of Nippon Sharyo Seizo Kaisha, Ltd near Toyokawa city Japan.The N700 Series Shinkansen is a high-speed train with tilting capability being developed jointly by JR Central and JR West for use on the Tōkaidō and Sanyō Shinkansen lines. The prototype 16-car train was delivered in spring 2005 for extensive testing. Full-production trains will have a maximum speed of 300 km/h, and tilting of up to one degree will allow the trains to maintain 270 km/h even on 2,500 m radius curves. The N700 Series Shinkansen high-speed train gathers the best of the latest technologies, such as a body inclining system, a train control and communication network, a new-type hood that smoothly wraps entirely around the space between cars, a nose shape with superior aerodynamic performance, and a high-performance semi-active suspension.

The N700 trains will enter passenger service on Nozomi services starting in the summer of 2007. It is projected that by 2009, all Nozomi through runs will be operated exclusively by the N700.