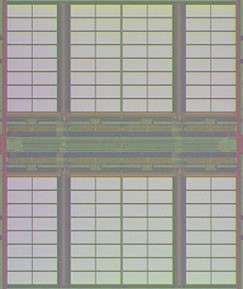 NEC has succeeded in developing a new SRAM compatible MRAM that can operate at 250MHz, the world’s fastest MRAM operation speed. MRAM is expected to be the dominant next-generation memory technology as it realizes ultra fast operation speeds, nonvolatility – ability to retain data with the power off, and unlimited write endurance. Verification at the SRAM speed level proves that the newly-developed MRAM could be embedded in system LSIs as SRAM substitutes in the future. Incorporating a memory cell with two transistors, one magnetic tunnel junction, and a newly-developed circuit scheme, the new design achieves an operation speed of 250MHz; double that of conventional MRAMs and almost equivalent to that of recent LSI-embedded SRAM.

MRAM are expected to generate new value and applications for future electronic devices thanks to their nonvolatility, unlimited write endurance, high speed operation, and ability to cut memory power dissipation in half. As substitutes for system LSI-embedded SRAM, MRAM can provide even more value as they are expected to enable extremely low power dissipation of system LSIs because they can sleep when they are not in use and wake up instantly.