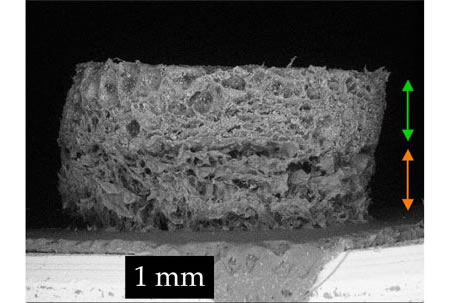 MIT engineers have built a new tissue scaffold that can stimulate bone and cartilage growth when transplanted into the knees and other joints. The scaffold has two layers, one that mimics bone and one that mimics cartilage. When implanted into a joint, the scaffold can stimulate mesenchymal stem cells in the bone marrow to produce new bone and cartilage. The technology is currently limited to small defects, using scaffolds roughly 8 mm in diameter. The scaffold could offer a potential new treatment for sports injuries and other cartilage damage, such as arthritis, says Lorna Gibson, the Matoula S. Salapatas Professor of Materials Science and Engineering and co-leader of the research team with Professor William Bonfield of Cambridge University.

The researchers demonstrated the scaffold’s effectiveness in a 16-week study involving goats. In that study, the scaffold successfully stimulated bone and cartilage growth after being implanted in the goats’ knees. The technology has been licensed to Orthomimetics, a British company launched by one of Gibson’s collaborators, Andrew Lynn of Cambridge University. The company recently received approval to start clinical trials in Europe.
Source:-