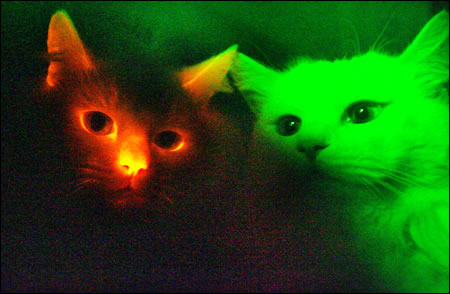 A team from Gyeongsang National University (GSNU) the preeminent national university in Gyeongnam Province, South Korea has succeeded in cloning cats after modifying a gene to change their skin color. Because of the red fluorescence protein in their skin cells, the three Turkish Angola kittens look reddish under ultraviolet light, the researchers said. To clone the Turkish Angola cats, Professor Kong IL-keun Kong’s team used skin cells of the mother cat. They modified its genes to make them fluorescent by using a virus, which was transplanted into the ova. The ova were then implanted into the womb of the donor cat. The red cloned cat research is expected to be utilized in dealing with certain genetic diseases in animals and humans. It will also help reproduce rare animals, such as tigers and wildcats, which are on the verge of extinction, the team said. According to the team led by Professor Kong Il-keun, four kittens were born in January and February by caesarian section, but one died during the procedure. They weighed between 110 and 136 grams at birth and now weigh 3.5 kilograms each now, the researchers said.

The first cloned cat, nicknamed Copycat, was born in 2002 at Texas A&M University. Many other animals such as cows, dogs, pigs, bulls and goats have been successfully cloned by a number of researchers in North America, Europe and South Korea. Called reproductive cloning, the method has been mostly used in cloning animals that are genetically identical, until Kong’s kittens were born with the tampered genes. The technique differs from therapeutic cloning, which is to make a “stem cell” that can be guided to grow into a specific body part.