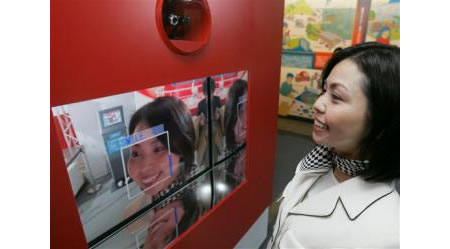 The breadth of a smile can be measured by new technology from Japanese electronics and health care company Omron Corp. The software technology, shown to reporters Thursday, scans a video image to detect faces. It can find up to 100 faces in an image, according to Yasushi Kawamoto of Omron.”Okao Catch,” which means “face catch,” then analyzes the curves of the lips, eye movement and other facial characteristics to decide how much a person is smiling using data collected from a million people and their smiles, he said. In a demonstration, a camcorder took videos of journalists covering the announcement. Percentage numbers indicating how much each person was smiling popped up in bold blue letters next to their faces on a monitor, flashing higher or lower as their expressions changed.The numbers ranged as high as 89 percent for a person who was grinning, while a somber face registered 0 percent.

Omron hopes to use its technology in the medical field, to assess the emotional state of patients, or pack it in mobile phones. Okao Catch can also be useful for people who want to perfect their smiles, or for robot communication to make it easier for machines to decipher human reactions, according to Omron. Okao Catch was part of a larger exhibition of new technology opening this week in Tokyo.