OKI has developed a technology called Area Sound Enhancement System that makes it possible to pick up sounds in a target area by positioning several directional microphones. The technology lets users hear speakers’ voices in a specified area, even in acoustically cluttered environments in which several people are talking at the same time, like conference rooms or offices. In environments in which speakers’ voices overlap with other voices and ambient noise and difficulties of hearing the speakers’ voices may interfere with smooth communication. In order to solve this problem, a technology that can accurately pick up only sounds in a target area is required. 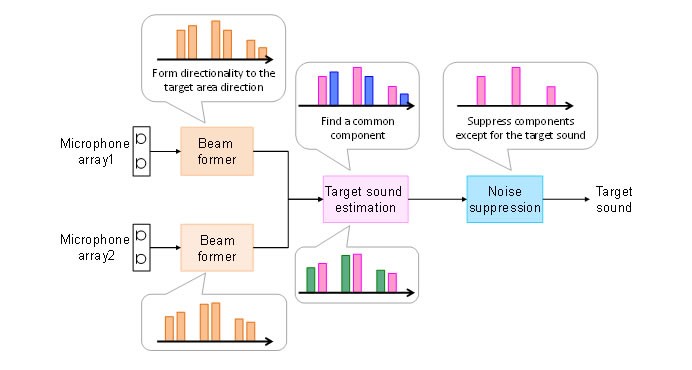 A common component in all directionalities of arrays is estimated to be a target sound, and then other components are suppressed as noises. This makes it possible to pick up only sounds in the target area and ensures clear speakers’ voices for video conferencing and other remote communication in noisy environments. The technology also allows the speakers to talk while shifting their positions and walking about, as long as they remain within the area covered by the microphone arrays. The system has wide applications beyond video conferencing, telework, and other modes of remote communication.