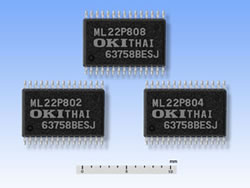 Oki Electric Industry Co., Ltd. today released the OTP (One Time Programmable) memory-equipped voice synthesis LSI, “ML22P80X Series,” which enables customers to write voice data directly to the chip through a specific tool, and to develop various industrial-use devices where only a few units are required of each of numerous different types. Because the voice data can be written in the field, this capability contributes to shortening the delivery time and facilitating the development of sample products. OKI also succeeded in reducing the space by half, compared to the previous LSI.With the new series, OKI succeeded in including the circuits for OTP memory, analog, and voice synthesis all in a single chip. This solves the problem of low voice quality. In addition, by including OTP memory to record voice data, customers can develop and test the product while writing the voice data onto the chip.