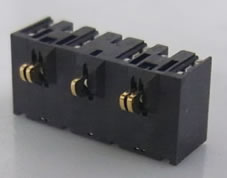 Omron today has launched mass production of a connector using subminiature contacts electroformed through an electroplating process, the first of its kind in the world. The employment of electroforming technology has led to versatile terminal shapes, microminiature terminal dimensions and superior characteristics, which cannot be achieved with a conventional press process. Connector terminals are usually formed by a pressing process, but currently available pressing technology has several drawbacks, making it difficult to satisfy demands from customers for greater miniaturization. Omron has solved these drawbacks by further upgrading its microfabrication technology and electroformed materials technology. This upgrade enables mass production of a connector using subminiature contacts that were impossible to form through conventional press technology.