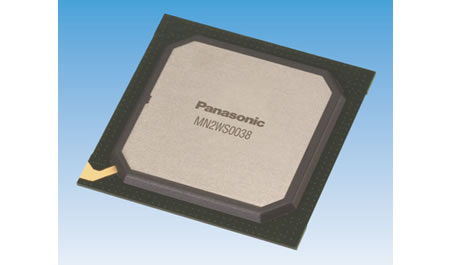 The new-generation UniPhier from Panasonic uses the MPEG-4 AVC/H.264, a next-generation codec. It can compress full-HD large image data down to one third to half that of the conventional methods while keeping high level definition. It also extends the recordable time significantly for the same media, and can realize smooth image data communication. To mount the next-generation codec on a system LSI, more elements than before must be formed on a limited space; actually 250 million transistors are integrated onto a single chip.

In addition, it is vital to keep the power consumption within a limited range when the number of elements increases. Panasonic starts sample shipment of a new-generation UniPhier system LSI from October 2007. Sample shipment of the new-generation Panasonic UniPhier system LSI is made possible through a 45-nm process technology for much higher integration density than before.