At the 93rd annual meeting of the Radiological Society of North America (RSNA) in Chicago, Royal Philips Electronics unveiled its latest innovative flagship product, the 256-slice Brilliance iCT scanner. The Philips 256-slice Brilliance iCT scanner allows radiologists to produce high-quality images with exceptional acquisition speed, including complete coverage of the heart and brain. It is so powerful it can capture an image of the entire heart in just two beats. Quite apart from providing stunning three-dimensional images from within the body, the 2.0589 million US$ machine also reduces the radiation dose given to patients by up to 80 per cent on other scanners. 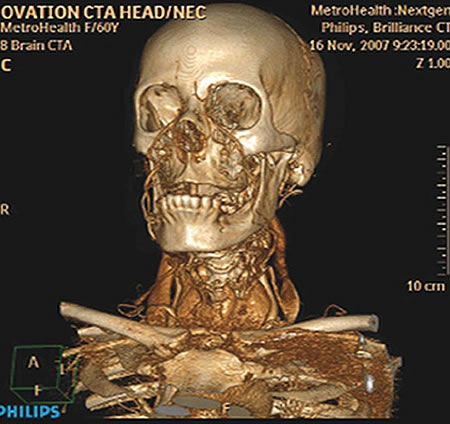 Its crystal-clear images, which can be rotated and viewed from different directions, will help doctors diagnose problems more accurately, particularly when examining the heart or looking for small cancer tumors. Computerised tomography scanners have been widely used in hospitals for many years. Forty and 64-slice machines have been introduced in recent years. Injured patients could have a full body CT scan in less than a minute. The procedure would have taken hours in the case of the first scanners.

The Philips 256-slice Brilliance iCT scanner generates pictures by passing X-rays that last only a few milliseconds, through the patient. As it scans the body, sending out 256 pulses every 0.3 seconds – enough to freeze-frame a beating heart without blurring the image – it also rotates around it. Less than three years ago, the 64-slice scanner was launched which produced such sophisticated images that there were claims that it could revolutionize surgery. It was brought to public attention in America when chat show host Oprah Winfrey broadcast images from it of her own heart check-up.