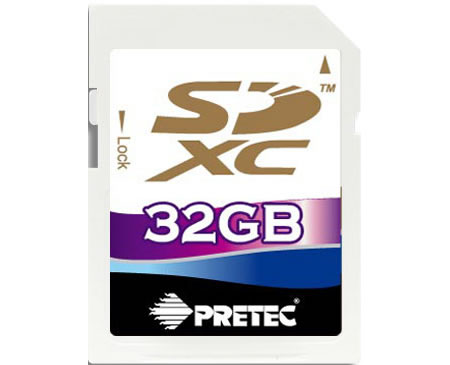 Pretec, creator of the highest capacity CompactFlash card in the world (100GB) and the fastest CF card in the world (433X), continues today its record braking history in the field of speed and capacity by unveiling the new SDXC 32GB, the world’s first, highest capacity and fastest SD card. SDXC (eXtended Capacity) is a next-generation SD card, with capacities up to 2 TB (2048GB), and read/write speed up to 50MB/s initially and up to 104MB/s in the future, with a possible 300MB/s as a long term roadmap. By using exFAT file system, Pretec’s 32GB SDXC card is not compatible with SDHC, which is using FAT32 file system.

Pretec 32GB SDXC card, sampling now to design-in customers, can reach the speed of up to 50MB/s, depending on the host system design which needs to be compliant with SDXC specification, will be enhanced the capacity to 64GB SDXC by the 2nd half of this year. As of today, no SDXC compliant host systems are available in the market yet.