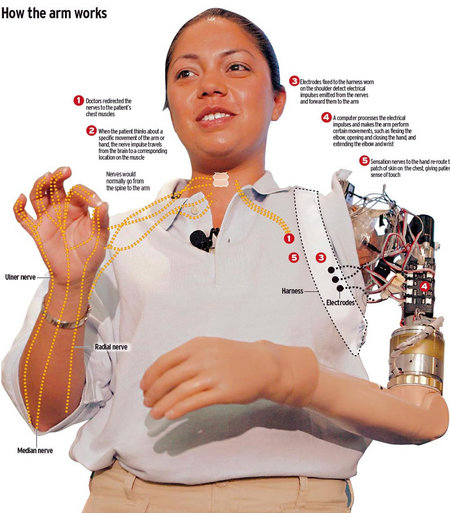 Prosthetic limbs enable Amputees to regain their sense of touch!

Amputees could soon be fitted with prosthetic limbs that enable them to regain their sense of touch, thanks to a break-through new bionic hand device. The advance is the latest of several recent developments by Dr. Todd Kuiken whose targeted reinnervation (TR) technique is opening up a wealth of possibilities in the field. A former US marine, who lost her arm in a motorcycle accident, says she can feel pressure and pain in her new limb. She underwent surgery alongside a fellow male patient. The operation redirected the nerves from their injured arms into the skin on their chest, meaning they can now feel just as though they still had real hands. Claudia Mitchell, 27, who lost her left arm at the shoulder three years ago, was fitted with the world’s most advanced prosthetic arm after the operation pioneered by Todd Kuiken. Sixty years old Jesse Sullivan – a double amputee is the world’s first bionic man to be fitted with prostheses by Dr Kuiken’s team.

Last year Ms Mitchell, a former US Marine, spoke of her delight at being able to use her bionic arm to cut a steak and peel a banana. It is effectively controlled by her thoughts, as sensors attached to her chest pick up electrical cues from her rerouted arm nerves. Dr. Todd Kuiken is director at the Neural Engineering Center for Artificial Limbs at the Rehabilitation Institute of Chicago. There is even a suggestion that as well as restoring a sense of touch to amputees, further tests may even open up the possibility of creating bionic limbs that can be controlled by thought.