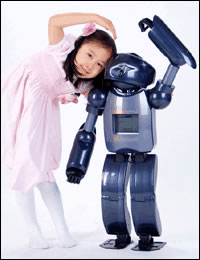 A Korean venture start-up KornTech has developed Korea’s first humanoid that recognizes people through embedded cameras and high-end face-tracking software. The 1-meter-tall robot, named Rogun, can walk on two feet and perform various functions suitable for a security guard or nanny. Rogun is capable of guarding homes around the clock and the camera-eyed robot will give a warning to its owner via cell phone when strangers visit an empty house. In addition, the handset-directed humanoid can show what is happening with kids at home when their parents are away, as it is connected to the wireless Internet. Rogun will be able to play with children by showing video footage on a seven-inch liquid-crystal display monitor placed on its chest.

Currently, KornTech produces the robot only after receiving orders, so its price is prohibitively high – more than $100,000 each. The company feels price could go down to lower than $5,000 in the not-so-distant future when mass production begins Rogun is Koreas first two-legged robot achieved through private funding. KornTech channeled around $1 million to create it over the past two years.