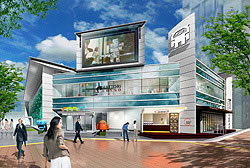 A robot museum where visitors can touch and play with more than a dozen different kinds of robots was unveiled to reporters on Tuesday in the Sakae downtown area in Nagoya ahead of its opening on Thursday. The Robot Museum In Nagoya, a two-story museum with floor space of about 2,600 square meters, has several exhibition corners.The robot museum is housed in a refurbished building that used to serve as an imported car showroom.The 2,600 square meter museum will center on an exhibition area entitled ‘Robothink,’ where everything from toy robots to industrial robots will be showcased in exhibits covering topics from robot history to the latest in robot technology.

Some of the robots that enjoyed the limelight of the 2005 Aichi Expo, held just outside Nagoya, will be prominently featured. The museum will also include a shopping area “Robot Mirai (future) Department,” offering robot-related goods, as well as a cafe restaurant set in a near-future style environment where robots coexist peacefully with human.