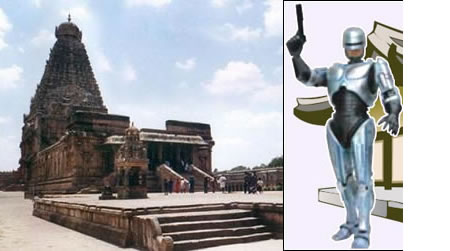 Robot to Guard temples from robbers

A robot will guard cultural properties, such as temples, from robbers. This is not a scene from a science-fiction film but the business plan of a Korean company. DU Robo the Seoul-based firm and its partner KT Telecop are in talks with the Cultural Heritage Administration about the robot-guard-temple scheme. Affiliated with Koreas predominant fixed-line telecom carrier KT, KT Telecop offers security services based on landline telephone pipelines. Last week DU Robo signed a memorandum of understanding with KT Telecop to carry out various projects with sophisticated robots.DU Robo hopes to deploy robots to schools so that they can guard students as well as schools around the clock. DU Robo already launched a pilot run of the plan by deploying a security robot, dubbed the OFRO, at a middle school located in southern Seoul.

The OFRO, which moves as fast as 5 kilometers per hour, has the ability of patrolling areas on pre-programmed maps or it can be manually controlled. Equipped with a camera and a microphone, the robot provides visual files to officials of KT Telecop or teachers at schools on a real-time basis.