Since the introduction in October 2000 of the first air purifiers equipped with Plasmacluster technology, Sharp’s proprietary air purification technology, total sales of products equipped with this technology reached 50 million units worldwide at the end of December 2013. Plasmacluster is a proprietary Sharp technology that cleans the air by emitting positive and negative ions like those found in the natural world. Its high degree of safety and reliable effectiveness has been proven by independent research and testing organizations in Japan and abroad.


Over the years, Plasmacluster devices have evolved in effectiveness as Sharp has made them more and more compact and given them the capability to generate increasingly higher concentrations of ions. As a result, they have enjoyed a steady increase in popularity as their spread into other industries accelerates. Plasmacluster technology has been deployed in 15 of Sharp’s own product categories, including air purifiers, air conditioners, refrigerators, washing machines, and cooling fans. 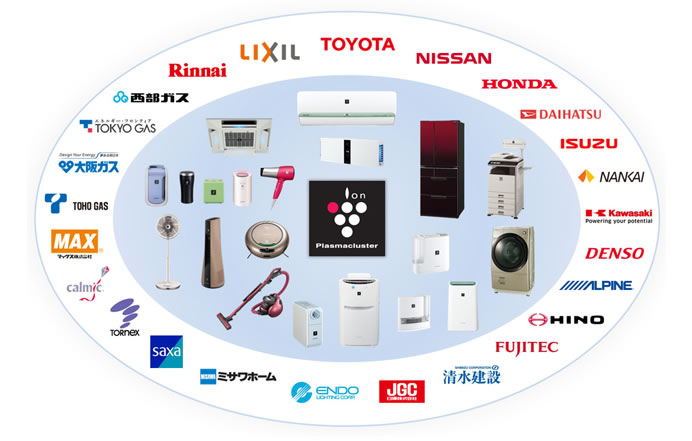 Air conditioners and washing machines equipped with Plasmacluster technology, the effectiveness of suppressing the growth of fungi that occurs on the interior surfaces and in agitator tubs has been confirmed. The release of fungi into rooms and their adhering to clothing is also reduced. In refrigerators, Plasmacluster technology also reduces odors that adhere to the wall surfaces of interior compartments. Plasmacluster provides solutions to problems of immediate concern, such as fungi and odors, and supports healthy living.