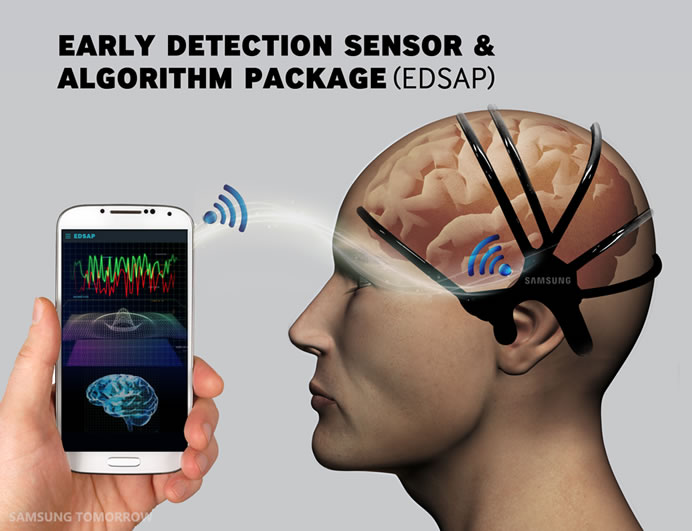 Early Detection Sensor & Algorithm Package (EDSAP) developed by a group Samsung engineers allows anyone with a smartphone or tablet to monitor the electrical impulses that are brainwaves, thereby gauging the probability of an oncoming stroke. EDSAP consists of of a sensor suite and a juiced up algorithm. The objectiveof EDSAP is to provide early warning, so that those at risk can visit the doctor for a proper diagnosis with sufficient time to prevent the potentially tragic consequences of a stroke. EDSAP’s sensors are placed on a headset, collecting and wirelessly transmitting brainwave data to a mobile app, where the algorithm analyzes the brainwaves and ultimately determines the likelihood of a stroke, all within a 60-second time span.

Additionally, by tracking brainwaves for longer durations, EDSAP can leverage its brainwave analysis capabilities to provide additional information related to neurological health, such as stress, anxiety and sleep patterns. The EDSAP algorithm, which translates brainwave data into stroke detection, is based on analysis of countless stroke patient brainwave data, which has been combined with a range of artificial intelligence and signal processing software.