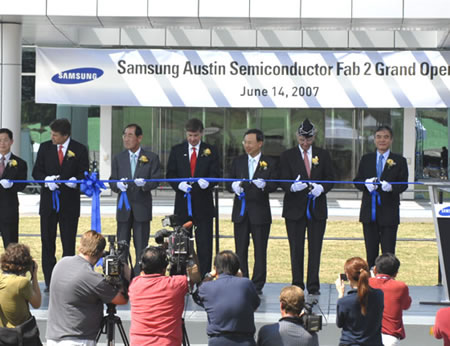 Samsung announced the opening of the largest 300mm NAND flash memory wafer plant in Austin, Texas on Thursday, in ceremonies that included Texas Governor Rick Perry and Samsung Electronics Vice Chairman & CEO Jong-Yong Yun. The 1.6 million square foot building–as large as nine football fields and one of the largest buildings in Austin–is one of the largest single semiconductor facilities in the United States. The first product of the new plant will be 16 GB NAND flash chips using 50-nanometer level process technology. The $3.5 billion facility will initiate operation in the second half of 2007 and ramp up to produce 60,000 wafers per month by 2008.

The Samsung plant will manufacture NAND flash memory chips, which are widely used in a host of consumer- related products, such as MP3 players, cell phones, digital cameras, and other mobile devices.