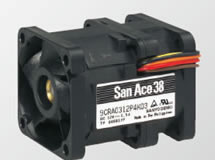 In a Counter Rotating Fan two fans that rotate in counterclockwise directions are placed in the same axial core in front and back, so that the characteristics of airflow and static pressure can be improved. The San Ace fan is suitable for 1U power supply and industrial equipment.