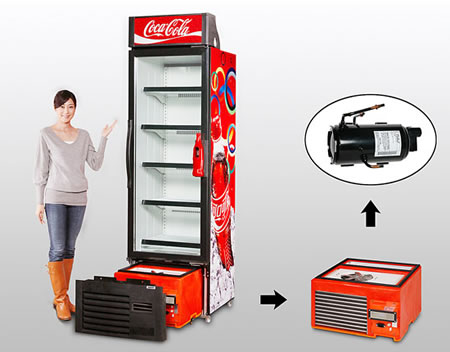 Sanyo today announces that together with The Coca-Cola, it has developed a new, non-fluorocarbon type cassette unit that employs a natural refrigerant (CO2) compressor, and includes an efficient Energy Management System, to be used for beverage coolers. Sanyo will begin supplying these new cassette units to Coca-Cola in March 2008.Coca-Cola, as an official sponsor of the Beijing Olympics set to start in August 2008, has announced in September this year that it will use in all Olympic venues highly efficient cooling equipment that do not use hydro fluorocarbons (HFCs), a potent greenhouse gas. To support this effort, Sanyo developed a compressor utilizing its technological prowess capable of utilizing a gas found everywhere in the atmosphere in nature, CO2.

Together with Coca-Cola North America, a new refrigeration system incorporating this new compressor was developed. As a result, a new non-fluorocarbon cassette was developed, which realizes high efficiency and durability globally. With this cooperative effort, Coca-Cola North America will be able to start a new market of non-fluorocarbon beverage coolers.