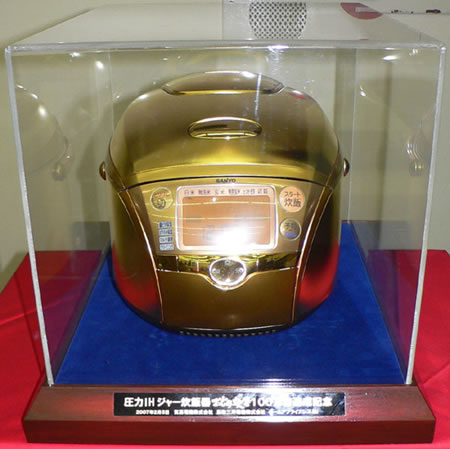 Sanyo will release two types of new rice cookers, ECJ-XP10 (white and black) and ECJ-V10 (champagne gold) on September 1, 2007. The new IH pressure rice cooker series adopts high thermal conductive copper for the kettle. The nickname of the cooker is “Takumi Jyundou Odoridaki (Maestro’s Pure Cooker Dancing and Boiling). The prices of the new series are a little under twice as expensive as the former products, according to the company. Newly -adopted major technologies are used in manufacturing the new IH pressure rice cooker series.The kettle is made by rolling pure 1.5-mm thick cooper (the degree of purity is 99.9%) put between stainless steel and aluminum alloy, enabling to heat quickly and enhancing heat-retaining property. Die-cast aluminum is used for the frame of the body for the first time in the industry, according to the company. The frame is a flat single piece, so it is more sturdy and easier to clean up than the resin used in the former products.

By repeatedly increasing and decreasing the pressure between 1 atm and 1.2 atm in the boiling process, the rice cooker stirs and evenly heat rice by making it dance. The new rice cookers ECJ-XP10 and ECJ-V10 from Sanyo will be available for approximately 131,250 yen ($ 1,074). The sales goals for new rice cookers are 50,000 units per year, according to the company.