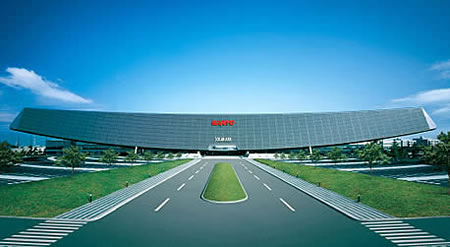 Sanyo announced today that it will establish a new ‘Advanced Photovoltaics Development Center’ within its Gifu Plant in Japan. The plant, located in Anpachi, Gifu prefecture, houses the Solar Ark, a large-scale solar power generation facility that stands as a monument to the world of Sanyo’s commitment and efforts to create a clean energy-based society. Sanyo is currently advancing the development of its solar technology, primarily focused on its proprietary HITsolar cells, at the Advanced Energy Research Center of R&D Headquarters and at the Solar Division of the Clean Energy Company. The ‘Advanced Photovoltaics Development Center’ will promote the development of next-generation thin-film silicon solar cells aiming at reducing the cost of solar power generation to match costs as low as electricity charges applied to home-use.

Aiming at a huge increase in sales, especially in the overseas market, Sanyo will invest 80 billion yen in HIT solar cells over the next three fiscal years and increase production capacity to 650 MW by FY2010, up 250% from the current amount.