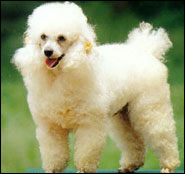 Seoul National University is said to have cloned a Poodle, the same breed of dog as the one shown. South Korean scientists, who created the world’s first canine clone, have cloned another breed of dog the Poodle famous for its ability in the water and bird hunting skills. A source familiar with the cloning yesterday said scientists at the College of Veterinary Medicine of Seoul National University (SNU) cloned a female Poodle midway through last year. The team, formerly led by the nation’s disgraced stem cell scientist Hwang Woo-suk, had previously cloned four dogs’one male and three females but they were all Afghan Hounds. The baby Poodle is the world’s fifth dog clone and the first other than Afghan Hounds said the source that declined to be named.

When contacted, Seoul National University researchers refused to confirm the cloning of a Poodle. However, a senior official at the Ministry of Science and Technology partially admitted the probability.