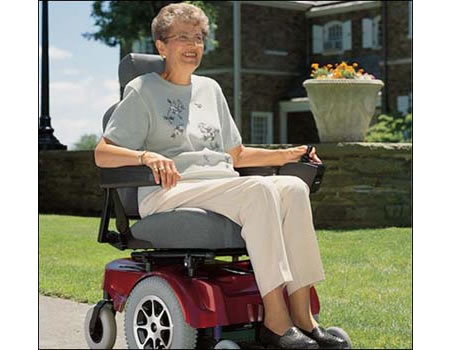 Severely disabled people to control their wheelchairs – just by moving their tongues!

Scientists are developing new technology to allow severely disabled people to control their wheelchairs – just by moving their tongues. Experts are working on a system which will let people operate all the functions of an electric wheelchair with eight different flicks of the tongue. A tiny microphone placed in the ear detects each tongue movement and a computer converts them into commands to start, stop or turn a wheelchair. Researchers found the most effective four tongue movements were touching the lower left, centre or right of the mouth – followed by a flick upwards, and licking the top palate. To keep the controls simple, each motion can be made twice in quick succession to create an extra four commands. The earpiece senses each different command by picking up vibrations caused by air pressure changes created as the tongue moves.

The technology is set to help thousands of seriously disabled people, such as victims of spinal injuries and strokes, whose movement is often limited only to tongue motion. Dr Ravi Vaidyanathan, who is leading the University of Bristol project, said users could customize the system to choose which tongue motions activate each control.