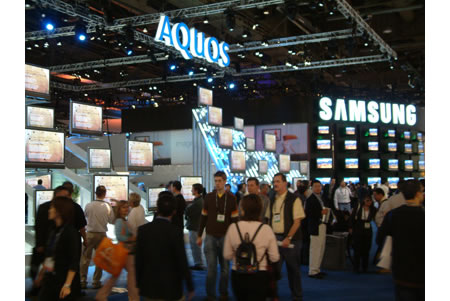 Sharp Corporation filed a lawsuit on August 6, 2007 alleging infringements of five of its patents on LCD-related technology by Samsung Electronics Co. Ltd. (Samsung) and its US subsidiaries Samsung Electronics America, Inc. (SEA) and Samsung Telecommunications America (STA). The suit was filed in the United States District Court for the Eastern District of Texas. The five patents involved with the lawsuit are US Patent Numbers 4,649,383, 5,760,855, 6,052,162, 7,027,024 and 7,057,689, all of which relate to LCD modules. In the complaint, Sharp requests that the Court award compensatory damages to Sharp and prohibit the sales of the infringing products. Sharp introduced the AQUOS LCD TV in 2001. The company started manufacturing large-size LCD televisions in 2004 at its Kameyama Plant in Japan. Sharp holds numerous LCD-related patents in Japan, the United States and other countries as a result of its extensive research efforts, and licenses its patents for general LCD technologies to LCD panel manufacturers.

Sharp has negotiated in good faith with Samsung for an LCD patent license since 2006, but has regrettably been unable to resolve this matter through negotiations. As a result, the company was compelled to file the current lawsuit to protect its intellectual property.