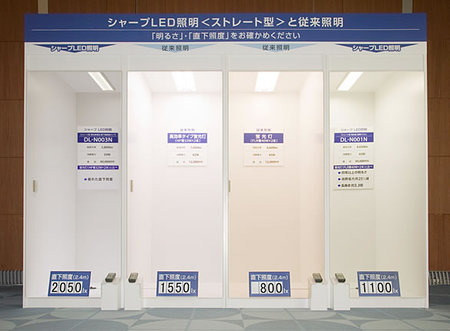 Sharp, Japan has developed four “oblong” type LED Lightings for use in factories and offices that deliver brightness equivalent to the commercial fluorescent lamp devices typically used in such locations. Fluorescent lamps, which are currently the dominant form of lighting in factories and offices, account for a significant percentage of the electricity consumed nationwide in Japan. In response, Sharp considered the need for lighting devices that would offer a higher level of environmental performance, and developed a family of LED Lightings featuring long product life, low power consumption, and containing no hazardous substances such as mercury, that are designed to be used not as partial illumination, but as primary sources of light.