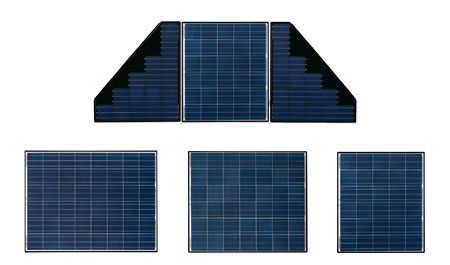 Sharp Corporation has developed a polycrystalline photovoltaic module (peaked-roof/ flat-roof model: ND-191AV) that achieves the industry’s No.1 module conversion efficiency of 14.4%. This module also features an installation capacity that is an average of 1.5 times greater than previous modules due to the strengthening of wind pressure resistance. A total of five new fiscal 2008 residential models for Japan will be released. The five new models will incorporate a newly developed highly efficient cell that reduces the loss in power collection by increasing the number of main electrodes from two to three, and increases the light receiving area by making the electrodes thinner.

Through these improvements, module conversion efficiency has been increased. In addition, the strengthened wind pressure resistance of racking systems and modules allows them to be installed nearly all the way out to roof edges, expanding installation capacity considerably.