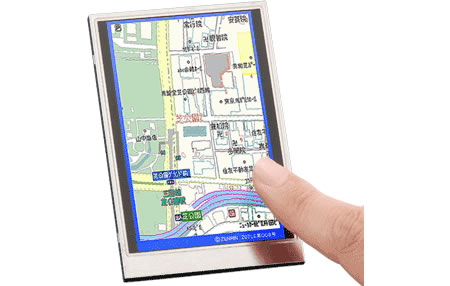 Sharp has successfully developed a new System LCD equipped with touch screen and scanner functions. An optical sensor is built into each pixel of the LCD panel, eliminating the need to bond a film to the panel for touch screen functions, and providing beautiful images without losing display image quality. Sharp developed its proprietary System LCD technology to successfully embed an optical sensor used in devices like scanners in each pixel of the LCD panel. This technology eliminates the need for films, resulting in a thinner, beautifully clear screen display compared to conventional touch screens. In addition, tactile recognition based on simultaneously touching multiple points on the screen is now possible, a feature previously difficult to implement.

With the new Sharp System LCD users can easily tap the screen with two fingers to enlarge or reduce a displayed map. Also, the scanner function can be used to scan in a business card placed on top of the screen, and further improvements to this function are expected to enable fingerprint authentication in the future. Sample shipments will begin in September of this year, with volume production slated to start next spring.