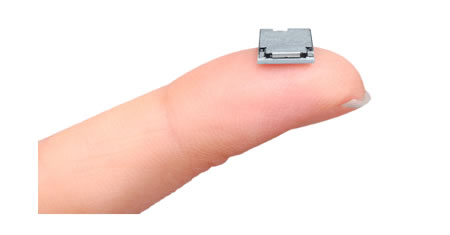 Sharp will introduce into the Japanese market the VA3A5JZ912 tuner module for One-Seg (terrestrial digital broadcasting scheme in Japan divides a single channel into 13 segments, one of which is dedicated to mobile applications) terrestrial digital broadcast reception that features the industry’s smallest package size and lowest power consumption, as well as offers enhanced receiving performance when the user is moving at high speeds. In One-Seg-compatible mobile phones, consumers strongly desire compact designs that fit comfortably in the palm of the hand and a high level of long-term performance. In response to such needs, Sharp applied high-density mounting technology to achieve the industry’s smallest package size (7.3 x 7.3 x 1.25 mm) approximately 45% smaller in volume than a previous model. It also developed a chip set combining a tuner IC and an OFDM (a digital modulation scheme used in terrestrial digital broadcasting) demodulation IC which use a proprietary control function to minimize current consumption. The result is the industry’s lowest power consumption (85 mW).

In Japan, One-Seg terrestrial digital broadcasts for mobile devices began in April of last year. In December, reception became possible in areas around the capital cities in every prefecture in the country. Total domestic shipments of One-Seg-compatible mobile phones are expected to exceed 10 million units by this summer.