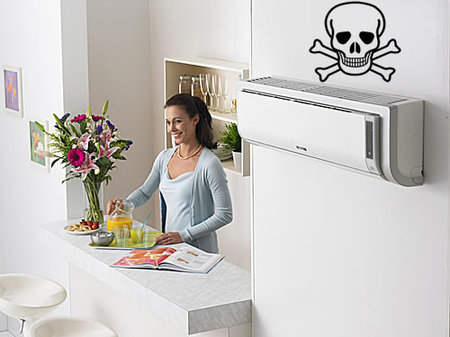 Silver-Nano washing machines and air conditioners injurious to your health?

Silver-nano washing machines can effectively kill germs hidden in dirty laundry; scientists suspect they are probably toxic to human cells and other organisms. Joint research by Korea University and the Korea Institute of Science and Technology has uncovered why silver nanoparticles are so powerful and efficient in killing germs. Their findings have led to worries that the microbe particles can damage cells of animals and plants exposed to them. Silver has been widely recognized as an antiseptic metal. Based on this, ancient Greeks used to store drinking water in silver vessels, and Koreans have preferred silver chopsticks throughout the ages. The study is raising an alarm with Korean companies such as Samsung Electronics, which has been promoting its “Silver Nano Health System” washers and air conditioners.

The U.S. government is to ban sale of such products from next year if they fail to provide evidence of its safety. But the South Korean government said that it has no plans to regulate the products. Firms like Samsung and LG Electronics started from the idea that silver-nanoparticles kill bacteria and they actually do. But scientists are still unsure of whether they are safe for humans. This field of research is still at a very rudimentary stage.