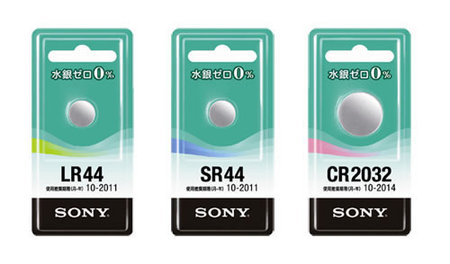 Sony today announced the realization of a mercury-free alkaline button battery (LR), and plans to commercialize six models of those environmentally conscious batteries. The mercury-free alkaline button battery announced today, incorporates proprietary Sony technology that mixes absorbent raw material into the cathode for the first time. By combining this with existing technology that prevents Hydrogen gas occurrence on the anode (which Sony originally adopted in its mercury-free silver oxide (SR) button batteries), Sony has succeeded in eliminating the use of mercury in this new batteries.

The development of a new mercury-free alkaline button battery, in addition to Sony’s existing silver oxide button batteries, will result in a reduction of approximately 470kg and approximately 68 bottles (500ml per bottle) of mercury per year.. In general, when mercury is not disposed properly, it can infiltrate the food chain, and mercury has therefore been identified as a material that has of the potential to cause serious damage to the human body and environment.