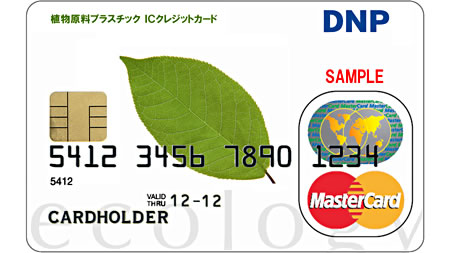 Dai Nippon Printing Co., Ltd. (DNP) Mitsubishi Plastic Inc., (MPI) and Sony today announced the joint development of the world’s first IC credit card using a biobased polymer as its primary material, and that the card has obtained permission of usage from MasterCard Worldwide. The newly developed IC credit card uses plastic derived from biobased polymer, a substance for which there are mounting expectations as a viable new resource. 46.5 percent of the card mass is comprised of biobased polymer, and with superior features such as a reduction in the use of exhaustible resources and prevention of increased greenhouse gas emissions, the card is capable of contributing to environmental conservation.

The card has been successfully mounted with both a contact IC chip and FeliCa, a contactless IC card technology developed by Sony. As a result, the card can be used as a multi-functional IC credit card mounted with applications including electronic money, point reward, and gateway controls such as company and student IDs