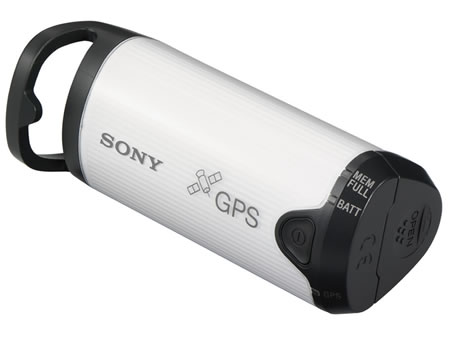 Sony Electronics today announced a GPS device GPS-CS1K that puts your pictures on the map. The 12-channel GPS unit is 3-½ inches long, weighs two ounces, and is sold with a carabineer to easily attach to a backpack or a belt loop. Using time and location recordings from Sony’s GPS-CS1 GPS device and the time stamp from a Sony digital still camera or camcorder, photo buffs can plot their digital images to a map and pinpoint exactly where they’ve been. The built in 31MB memory allows to record approximately 360 hours log information. To arrange your pictures geographically, import the logged data from the GPS device, using the supplied USB cable, and then download the digital images to a computer. The supplied GPS Image Tracker software synchronizes the images on your digital camera with the latitude, longitude and time readings from the GPS-CS1 device. Once synchronized, your photos can become virtual push pins on an online map by activating the Picture Motion Browser software bundled with the latest Sony cameras and camcorders released after July.

You can easily add new photos and coordinates to the mapping web site, courtesy of Google Maps, and showcase years of globe-trotting. The Sony GPS-CS1K measures 36 x 87 x 36 mm, weighs 55gm and will be available from September for approximately 15,540 yen ($135).
Via Sony (Japanese)