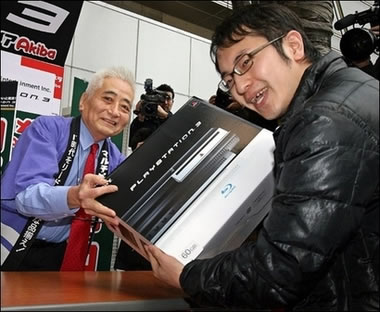 Japan’s video game giant Sony Computer Entertainment executive Shigeo Maruyama hands a new video game console PlayStation3 to the first customer Akihiro Okawa at an electronic shop in Tokyo on 11 November 2006.Sony’s PlayStation 3 made its highly anticipated debut in Japan to long lines on Saturday, with local stores selling out their supplies of the video game console in a pattern that’s expected to be repeated around the world. Plagued with production problems, Sony Corp. has managed to ready only 100,000 PlayStation 3 machines in time for its debut in Japan.When it goes on sale in the United States on Nov. 17, some 400,000 PS3 consoles will be available there.